Drought records set in August. Much of Missouri left high and dry.

COLUMBIA, Mo. - A late-August heat wave and little to no rain have left parts of northern Missouri in the grips of a flash drought.

"The driest conditions are across some of the north central, northeastern counties in Missouri," said Pat Guinan, extension climatologist for University of Missouri's Commercial Agriculture Program. "Kirksville, Brookfield, Edina, Macon all reported a trace of precipitation in August."

"Northern Missouri, as a whole, experienced its driest August since 1984. For some northern cities, the drought was even worse.

"For Kirksville or Edina or Brookfield, it was their driest August ever," Guinan said. "When you receive no precipitation for an entire month, it's probably going to set a record."

The northern Missouri drought didn't just spring into existence in August. Guinan said June and July were dry months too. It was the cooler weather earlier this summer that softened the impact of the dry conditions. We also had an unusual number of cloudy days, which mitigated evaporative rates, he said.

"The summer is going to go down as below normal in the temperature category," Guinan said. "That initially held the drought at bay."

Moving from flash drought to flash flood, some south central counties in Missouri saw the wettest August on record, with some areas receiving 15-20 inches of rain, Guinan said.

Despite those record-setting rain events in southern Missouri, much of the state has gone at least three weeks without any measurable precipitation, so all of Missouri needs a drink of water, Guinan said. There was one exception.

"We hear about million-dollar rains. We saw that occur in the far northwestern corner of Missouri," he said. "There was an event on Aug. 15 and one on Sept. 1, and that really helped the soybean crop, pastures and some of the corn crop."

With parts of Missouri hoping for rain, there might be a change on the way. Guinan said that there are indications that we could see a better chance of precipitation starting the week of Sept. 8.

As we enter the fall, lower temperatures will surely come.

"Because of shorter days and the migration of the sun, we'll see a cooler trend. As for precipitation, all bets are off," Guinan said. "Climatologically, September tends to be a wetter month than August for Missouri, but we've seen very dry Septembers, we've seen very wet Septembers. Currently the situation is somewhat dry." 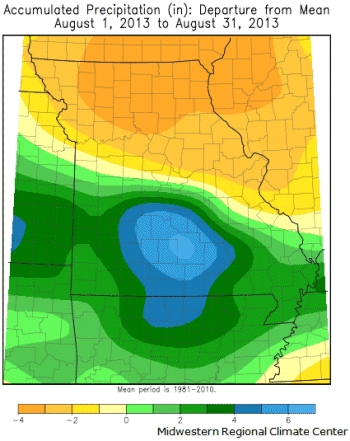 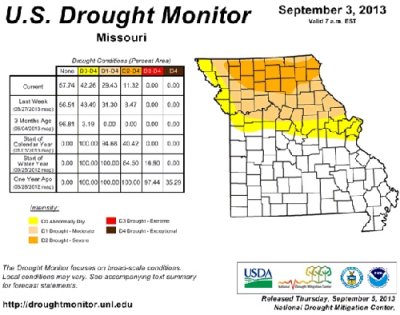