COLUMBIA, Mo. - September in Missouri was uncharacteristically warm for the beginning of the fall season.

"The heat wave that started in August spilled over into September," said Pat Guinan, climatologist for the University of Missouri Extension Commercial Agriculture Program. "There were places in the state that saw triple-digit heat in September, including several locations in the northern and western parts of the state."

Those summer-like temperatures made September the first warmer-than-normal month since February, Guinan said.

"We had a cool spring and the summer was somewhat cool too. September was the first time in seven months that temperatures were above normal," he said.

Parts of the state saw rain in September, but not enough to negate drought conditions. Guinan said that for the past four months, starting June 1, the northern half of Missouri saw 50 percent of normal precipitation.

"You're in a drought when you have only half of normal precipitation over four months," he said. "You're talking about deficits that are about 8-10 inches below normal."

According to Guinan, even though parts of the state received a bit more precipitation, when you average the totals, September's rainfall ranked below average.

Looking at regions, the heaviest rainfall totals fell across pockets of northwestern and southwestern Missouri, where 3-5 inches were common, Guinan said. 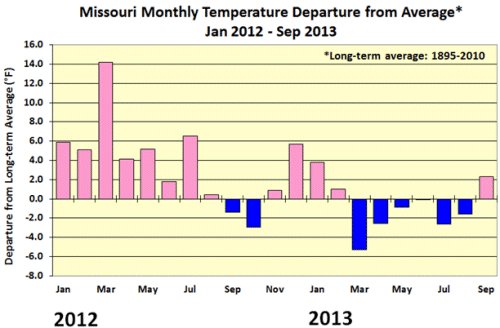