Early October saw temperatures in the 70s and 80s, said Pat Guinan, climatologist for University of Missouri Extension's Commercial Agriculture Program. Then a strong Canadian high-pressure system settled over the state and the mercury dropped.

"On Oct. 22, 23 and 25 we saw freezing temperatures over a lot of the state and on Oct. 25 record lows were established when temperatures dropped into the low to mid 20s," Guinan said.

While temperatures set records in the Show-Me State, that wasn't the case for precipitation.

"The statewide average was about 3 1/2 inches, which is about normal, but Missouri is a big state so there was some variability in precipitation numbers," Guinan said.

The heaviest amounts of rain fell across southwestern and southeastern parts of the state, where 4-6 inches were common, Guinan said. Lowest monthly rainfall totals occurred west of St. Louis with less than 2 inches.

The final days of October brought a lot of rain to parts of the state with 1-3 inches over a three-day period.

"A tropical fetch of moisture from the Gulf of Mexico and Pacific Ocean interacted with a strong storm system bringing rain to the central U.S.," Guinan said. "Much of Missouri received significant rain from Oct. 29-31."

All that rain did bring a little relief to some dry areas in Missouri.

"Parts of northern and central regions of the state have been in moderate to severe drought since June, so that rain at the end of October began to recharge the soil profile and bring the surface water supply up a bit," Guinan said. "But they still need more precipitation in those areas to fully recharge the water supply above and below the ground."

What's ahead for November? The monthly outlook from the National Weather Service's Climate Prediction Center indicates an enhanced likelihood of warmer than normal temperatures for the southern third of Missouri, Guinan said. The precipitation prediction for November is leaning toward wetter than normal. Far northwestern Missouri is the exception, with equal probability for above-normal, below-normal and normal precipitation. 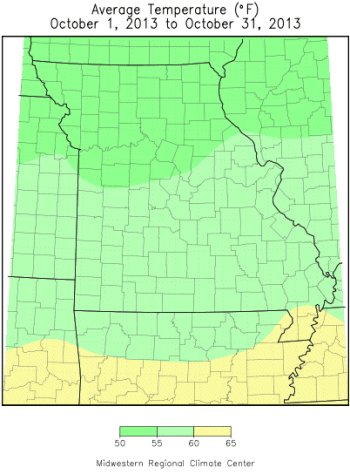