"February went along with the pattern we've seen this entire winter. If anything, it had an exclamation point on it at the end of the month," said Pat Guinan, climatologist for University of Missouri Extension's Commercial Agriculture Program.

The average statewide temperature of 25 degrees is 9 degrees below normal, which is a big number when you're talking about a monthly departure, Guinan said. Once the data is processed and validated, February of 2014 could be the coldest February in 25 years, possibly 35 years, he said.

Parts of northern Missouri got more than their fair share of the cold, with temperatures running 10 to 12 degrees below normal.

It wasn't just February. The meteorological winter season of December through February had a preliminary average of 27 degrees, making it the coldest Missouri winter since the brutal winter of 1978-79, Guinan said. Once the final numbers come in, this could be the ninth-coldest winter since 1895.

Severe temperature swings, seen at the end of January and beginning of February, produced a very rare event for Missouri: cryoseism, or "frost quakes."

"We had a few days of higher temperatures that allowed the ground to thaw. Then temperatures dropped 50 degrees or so to below zero in a single day, causing soil moisture to freeze and expand rapidly. This stress produced sudden cracking and loud popping noises emanating from the soil," Guinan said.

This is more typical in the northern plains and up into Canada, but this winter conditions were right for frost quakes in Missouri.

It wasn't just temperature that was below normal. For the past three months, precipitation in Missouri has been below normal too.

"Ironically, when you look at snowfall numbers, they're running above normal," Guinan said. "But when you melt all the snow and ice it didn't add up to much precipitation."

Guinan says the dry conditions continued through the end of February. Even parts of southern Missouri were dry last month. Parts of northern and central Missouri have been dry since last summer, with precipitation 10 to 12 inches below normal.

The U.S. Drought Monitor map has much of Missouri in an abnormally dry condition or a moderate drought condition. Guinan said Missouri needs recharge both above and below the ground.

Looking ahead to March, Guinan said the monthly outlook from the National Weather Service's Climate Prediction Center is calling for below-normal temperatures here in Missouri.

For more information, go to the Missouri Climate Center website at http://climate.missouri.edu. 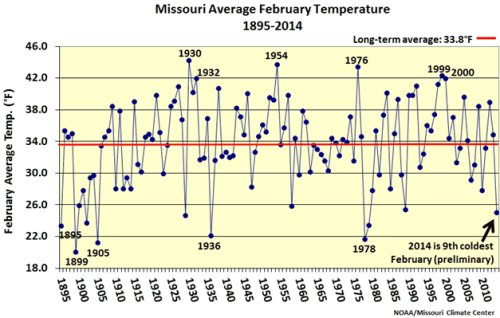 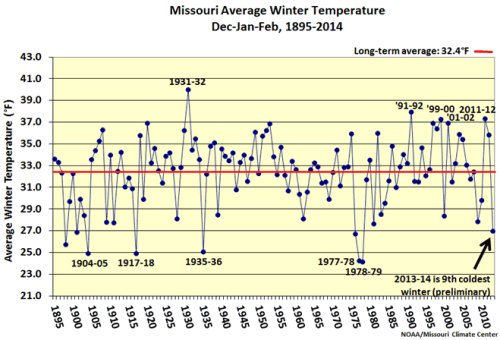 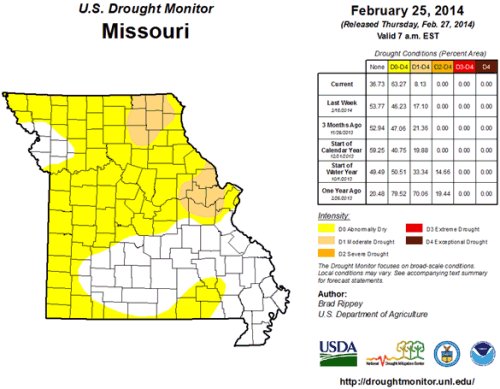 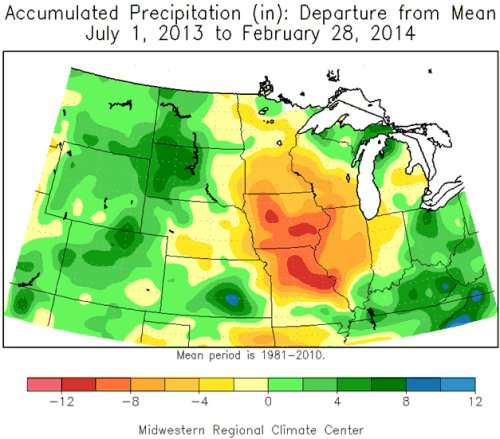