June had weather ups and downs, but overall was a fairly normal month

COLUMBIA, Mo. - June in Missouri had a few days of cool weather and some regions had lots of rain. But overall, the state's weather for the month was near normal.

"It started out really cool, especially the first half of the month, then we saw some warmer temperatures during the latter half of the month," said Pat Guinan, climatologist for the University of Missouri Extension Commercial Agriculture Program. "When we crunch all the numbers, it's going to be a near-normal-temperature month."

When you look at precipitation for June, it's a bit more complicated.

"There was a lot of variability across the state," Guinan said. "Looking at the state as a whole, it will turn out to be near-normal at about 4 1/2 inches, but it was anything but that when you regionalize precipitation across the state. The east-central part of Missouri saw 4 to 6 inches of rain, while the northwest region was drier at 2 to 4 inches."

Some of the largest differences occurred in southwestern Missouri. Barton, Jasper and Dade counties had more than 10 inches of rain. At the same time, Barry, Stone and Taney counties had less than an inch of rain. That's a huge difference over a short distance, Guinan said.

There was a lot of localized thunderstorm activity in southwestern Missouri. In southern Greene County and northern Christian County, an isolated thunderstorm dropped 6 to 9 inches in just a few hours and caused extreme flash flooding, he said.

"That can happen, especially during the summer season," Guinan said. "We get those thunderstorms that pop up. Some of them might not move much and drop a lot of rain, while your neighbor down the road will miss out on it completely. We've had several examples of that in June."

For weather information from the Missouri Climate Center, go to climate.missouri.edu/weather.php. 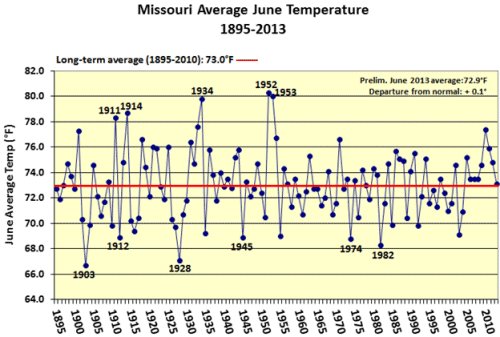 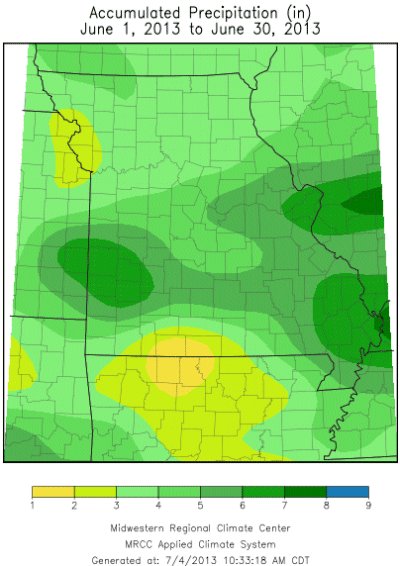