July and August rainfall in Missouri: The tale of the haves and the have-nots

COLUMBIA, Mo. - There were vast regional differences in rainfall in Missouri for July and August. Parts of the state were too wet while others were too dry.

"The trend was dryer across northern Missouri, wetter as you went south across the state," said Pat Guinan, climatologist for the University of Missouri Extension Commercial Agriculture Program.

In July there were heavy pockets of precipitation in parts of southwestern Missouri where a few counties had 7-10 inches of rain. At the same time, parts of north central and west central Missouri saw less than 1 inch of rain, Guinan said.

Statewide, July rainfall averaged just over 3.5 inches, which is slightly below normal. That makes July the first month in 2013 with below-normal precipitation, Guinan said. Overall, the northern half of the state saw 1-3 inches, while the southern half had 3-6 inches.

A stubborn upper-air weather pattern over the past several weeks was creating that disparity.

That pattern put Missouri under a northwesterly flow regime with occasional disturbances moving along it, Guinan said. Add surface conditions that were favorable for storm activity and it was a recipe for lots of rain in parts of the Show-Me State.

There was a stationary front over parts of Kansas, southern Missouri into Tennessee, plus a low-level flow of Gulf of Mexico moisture that interacted with that front. These features, in combination with the aforementioned upper-level conditions, provided several opportunities for thunderstorm complexes to develop and drop prolific rainfall over the area for many days, Guinan said.

Less than 150 miles to the north and those favorable rain conditions disappeared. We didn't have a frontal boundary across northern Missouri to serve as a catalyst for initiating shower and thunderstorm activity.

July 2013 Weather and Its Impacts on Missouri: http://climate.missouri.edu/ 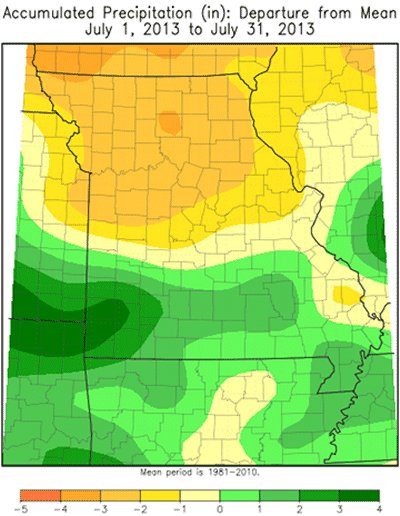